When To Change Timing Belt 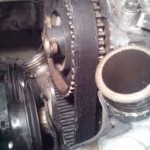 No you can not see the timing belt, it is located inside the engine and has a hard plastic cover protecting it, the cover is called….wait….the timing cover and is located at the front of the engine.  The belt is critical for the engine to run, without it the engine will not run.  We usually suggest to the customer to replace the timing belt every 80,000 miles or so or as your owners manual suggests.

The bad part about a timing belt, when it breaks you are left walking BUT it can also do serious internal engine damage. The valves inside the engine in the cylinder head can come into contact with the piston which will cause the valve to bend. Once the valve is bent the cylinder can not hold compression. The repair is to remove the cylinder head and replace any damaged valves, and it’s very expensive.

The type of engine that can have damage due to a broken timing belt is called an “interference engine”.

Here is a good video showing the problem

This is a picture of a timing belt, notice the “cog” teeth, unlike a smooth serpentine belt which is visible with your naked eye and drives the accessories like alternator and A/C compressor. 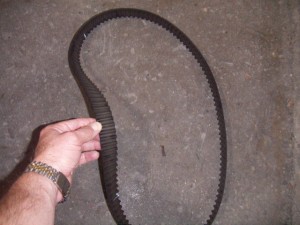 If your engine is driven by a metal chain, looks just like a bicycle chain, you do not need to replace it as maintenance and it usually lasts the life of the engine without issues.