Symptoms of a Bad Alternator in Your Car 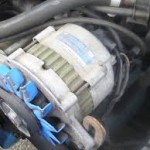 My car will not start and my neighbor looked at it this morning and thinks I might have a bad alternator.  In your opinion what are the symptoms and signs of a bad alternator and how can I test it myself?

Well, if the engine will spin over and over but will not start, you have another issue and it is not related to a battery or alternator problem.  Signs of a bad alternator are pretty simple.

My super simple rule of thumb. If the battery looks old or you know it is at least 3 years old I would replace it. The average life of a car battery is about 3.5 to 4 years. So if you are 3 years old and having a dead battery issue I would just replace it and see what happens.

Testing the old battery at this point would be a waste of my time.  I would need to charge it overnight first, then I would need to “load test” the battery to see if it can hold any loads and charges that the alternator will place on it. Again, if your battery is older than 3 years, I would not go through the hassle.

If the new battery goes dead after you have been driving for a while, then yes the alternator could be bad or you still have a battery connection/cable issue that is not allowing the alternator to recharge the battery.

If possible, I would replace the battery then have your alternator out put checked at your mechanic. This is the proper way, but if you are on a budget, grab your jumper cables and hit the roads closest to your house. You will probably get some kind of battery warning light on your dashboard if the alternator is not keeping up with the demand of the battery.

As a side note. A car that has a weak or worn out battery can cause the alternator to work much harder than it should, causing premature alternator failure. Another reason to replace the battery every 3 1/2-4 years. Which is much cheaper than a new alternator and a tow truck bill.

6 Comments on "Symptoms of a Bad Alternator in Your Car"