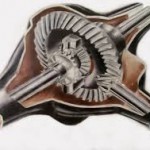 I recently bought a 1992 K Blazer with the 5.7/v8. The transmission was replaced recently, but there is a leak of transmission fluid, its a small one hardly anything on the ground, just wet on the bottom of the transmission. The vehicle shifts great though, and the engine still sounds really strong.

That is a minor problem. When I bought it, the guy told me that the garage had put an s10 u joint in mistakenly instead of a full size.

The reason I asked him is when I drove it, there is a whirring sound from the rear. My roommate is very car knowledgeable, and after running it at 80 mph on the highway for a jaunt yesterday, he swears the rear differential is going out.

We bought 2 quarts of gear oil and used them both, so obviously the reservoir for the differential was quite empty. Do you think that it is the rear differential or is it possible it is something else? And if it is would be more practical to buy a lower mileage axle and replace it completely?

I have been fooled many times by tire noise that I was assuming was differential noise. ESPECIALLY on a large SUV like this, which I would suspect to have somewhat aggressive tire pattern.

If the noise is there all the time, either the differential is shot, or you probably have tires that are making the roaring noise. Swap the tires around or replace the tires and see if the noise goes away.

If you suspect the differential still, pop off the rear cover and see how much metal shavings come out. If there is a lot of metal shavings, you probably need a new rear end. There is usually a small amount of shaving/flakes in the bottom.

Yeah it actually appears and disappears with different speeds. My roommate is convinced its the differential. Would an improper u joint do that?

No, I don’t think so, I’ve never seen it lets put it that way. Usually a u-joint will make a rhythmic squeak noise as the drive shaft turns. I don’t know if an s10 U- joint is even possible to install, or if it is even any different than what it should be,. I think that was a nice cop out.

If it was really that low on fluid, no telling what all is damaged. I would either drive it until it craters, might be next week, might be never. Its cheaper to get a whole rear end from a junk yard than overhauling yours. Something to think about, but make damn sure you get one that is EXACTLY the same, or you might find out it is different AFTER You have it installed. There is a number stamped on the axle tube that you want to match up with the used one you buy.