How Can I Stop an Engine Oil Leak at The Valve Cover Gasket ? A Recurring Problem

Reader Question : My valve cover gaskets continue to leak oil. I have had them replaced three times in the last two years, and now they are leaking again. Why is this happening?
Arnold

Stopping an oil leak can sometimes be frustrating if you don’t find and correct the source of the problem. The valve cover gaskets are probably just the symptom of the leak and not the source.

First, you need to determine what kind of “leak” your car has. There are two types of oil spills, a seep and a leak. A seep is just that, a slow seepage of oil that does not produce a drip, is sometimes not noticeable on the pavement as a “spill,” and generally does not seep enough oil to adversely affect the oil level between oil changes. You may sometimes notice smoke or a burning odor caused by oil seeping on a hot engine or from coming into contact with hot exhaust parts. Seeps do not necessarily have to be repaired immediately.

A leak is just that, a leak that causes a drip of oil when the vehicle is parked. A leak will produce a puddle of oil on the pavement, and continues to drip while the vehicle is driven. A leak can adversely affect oil levels, and if not checked, can drain enough oil to do internal engine damage. A leak will usually be accompanied by smoke and a burning odor. Leaks should be corrected immediately.

It is extremely common to have oil seeps from a valve cover on just about every car with over 30,000 miles. A small oil seep at the valve cover gasket will attract dust and dirt that sticks to the seepage, so this “seep” can be obvious to the naked eye and still not be serious enough to require replacement of the gaskets at this time.

Just for grins, I went out and looked at my car and my wife’s car, and both vehicles have valve cover seeps. Although these seeps are coming from a leaking valve cover gasket, they do not warrant replacing the gasket at this time. If one of my cars were taken to a repair shop, I would suspect I would receive a call from the service manager advising me my valve covers are leaking and should be replaced. He would be correct to say they are “leaking,” but if I did not experience one of the symptoms of a leaking gasket I described earlier I would not have the gaskets replaced at this time. 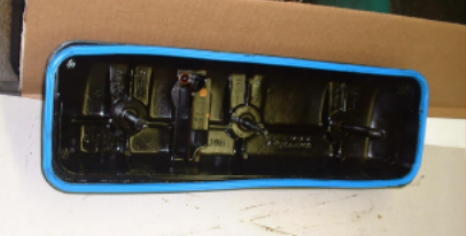 The hot exhaust system is located directly below the valve cover, and a small amount of leaking oil that comes in contact with these hot exhaust parts can produce smoke and a burning odor. Sludge build up due to lack of frequent oil changes can cause these drain back holes to become restricted, slowing the drain back process. This restriction causes the oil to accumulate in the valve cover longer and exert more pressure on the valve cover gaskets.

A Positive Crankcase Ventilation (PCV) valve is inserted in the valve cover itself, and the purpose of this valve is to act as a vent for excess pressure that accumulates inside the engine and valve cover areas.

A restricted PCV valve can cause this excess pressure to find new avenues to vent, and an oil gasket or seal is usually “blown out” to let this pressure escape. Think of the PCV valve as the valve on top of an old time pressure cooker in your kitchen. When the pressure inside reaches a certain point, the valve begins to shake from side-to-side and vent off excess steam. If this valve is restricted, the steam will find another way to vent off excess pressure–by blowing the lid off the pot.

If you have a higher-mileage car and are only experiencing seeps as explained above, then it is my recommendation to just keep an eye on the gaskets and replace them should the problem escalate to a true leak. Also, make sure you are following proper preventive maintenance of your vehicle. The PCV valve should be replaced periodically, and the PCV system should be inspected to make sure no restriction is present.

I replace the PCV valve when I perform a tune up on vehicles in my shop. The valve is inexpensive and easy to install. Changing the engine oil and filter often and inspecting the PCV system are the best ways to prevent costly engine oil leaks.