My Car Has a Broken Timing Belt 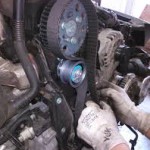 I have a 1996 Mitsubishi Galant now everything was fine until my car shut off in the middle of the road and I was told my timing belt broke so I took it to a shop and he said my car had a interference motor so he has to take the whole head gasket off and see if it bent valves and replace the timing belt and stuff.

So he completed his job and a week later my oil light came on and i just did a oil change a month before that after that my car started to act like it didn’t want to go when i push the gas pedal.

Then it would go then don’t wont to go again…then after that my car started to have white and gray smoke coming from my tailpipe and a lot of people told me I’m burning my oil then have some told me I blew my head gasket but my oil doesn’t look milky and my antifreeze isn’t low.

Hummm, this does not sound good at all.  I would guess that you probably have an internal engine problem, like a bent valve, cracked cylinder head or some internal damage that was not repaired correctly when the cylinder head and head gasket were removed.

If there does not seem to be an internal coolant leak I would then do a compression test on the engine to determine if there is internal damage.  If compression on one or more cylinders is much lower than the others, then removing the cylinder head again for inspection is the next step.

What should have happened in that last repair was the cylinder head should have been sent off to a machine shop and a valve job should have been done while the head was off the engine. That is the standard procedure in cases like yours, but USUALLY skipped to save a little money and or time…but usually always comes back to bite you later.

Maybe you can get the mechanic to do the labor at no charge, and you pay the machine shop fees plus parts, probably $350 or so for the valve job and a new head gasket set.

You are definitely reaching the point of no return on this older vehicle and will never get your repair money back out of it, but if you can spend $350 to do the job over again and do it correctly this time it might be money well spent, anything more than that would probably not be advisable.

1 Comment on "My Car Has a Broken Timing Belt"