Why Did I Buy a Kia Sedona and What’s It Like to Own One?

The 2004 Kia Sedona is a great minivan. When my husband (Austin Davis) told me three years ago that we were trading in my Volvo for a minivan, I was so sad. I was thrilled to be expecting our second child and embarking on the unknown career as a full-time mom, but the stigma of driving a minivan made me feel really…well, dumpy. That was until we bought the car, and I learned to love it.

We did a lot of Internet research before buying our car, and the Kia Sedona attracted us because it was the only minivan we could get with four leather captain seats for under $35,000. All of the less expensive models came with cloth bench seats. Who wants to try to keep cloth seats clean with toddlers in the car? And who wants to climb over two car seats to try to get into the third seat? The two separate captain seats allow us to walk between them to easily access the third seat without having to remove a car seat. And it lets both of our children have their own space—Moms know what I’m talking about here.

The Kia Sedona also comes with a five star safety rating and a ten year warranty. We just had to see this car. My husband’s family has been in the auto repair industry for several generations, so I was confident that his inspection of the Kia minivan would tell me if it was well made or just a cheap car. He was actually impressed with his under-the-hood inspection and how it handled.

Really, he was very impressed. Now that we’ve been driving our Kia Sedona for three years, he is still very impressed. We have had one problem with the air conditioner, but it was covered under warranty, and we got awesome service at the dealership. Can’t beat that.

One of the biggest surprises we found when we went to look at the Kia minivan is the roominess of the third seats. We expected to be cramped back there like in our Expedition, but there is a LOT of leg room back there (much more than we actually need), the two seats recline independent of each other, and there’s even a laptop port. Our guests travel in style.

The only thing I would change about my Kia minivan is the very limited space behind the third seat. If it was just six inches or so longer I could fit a regular sized stroller or our suitcases back there without having to take out a rear seat. The third seats do come out very easily, and even though it is a bench seat, the seats are two separate units so I can take out only one and leave a seat if I need it. This is just one example of the versatility of the car. But…even better is that the new 2006 Kia Sedona has third seats that fold flat INTO THE FLOOR! Problem solved, Moms happy.

The car gets great gas mileage, which is one of the main reasons we decided to look at a Kia minivan instead of another Expedition.

And that was three years ago before gas prices really started to sky rocket. We’ve been blessed many times over with our purchase of a Kia Sedona minivan, and I know you will feel the same way if you choose one over an SUV. 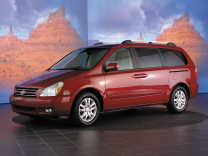