I bought a 1993 honda civic EG8 recently. It has been fully modified(the body & interior) the problem what im having is that when i ON the A/C and run the heat gets a little bit up than the 1/2 mark.. it starts getting high.. this only happens when the A/c is ON and soon as i off the AC the heat gets reduced and gets to the 1/2 mark. i really cant understand whats up coz i bought this recently.

I thought because the AC condensor is blocked and i cleaned the AC condensor as well as the radiator. but still the problem is there. I noticed another thing, when i switch on the AC only the AC fan gets start and not the Radiator fan and the radiator fan starts only when the engin heat is normal. and high.. i dont know weather this is normal in Honda’s coz in toyota and other nissan cars when we on the AC both fans start working.

But in this.. only AC fan. and when running without the AC only the radiator fan gets on when it gets a normal heat. i have attached a some pics of the modification just check weather its ok! i mean the front buffer has been modified and the air flow mit be a problem for the heat as i think. kindly check and let me know please.

Also sometimes the engin check light glows and today when i was driving it started glowing after i had a long run and stopped and started going again and i realised when im driving in the 5th gear when i released the gas peddle it gave a little jurk like a plugg miss, then i shifted to the 4th and started to throttle.

Then it was ok den again in the 4th also the same thing happened.. it was little unusual than other days.. the miss happened only 2 times.. in those two gears.. and i slowed and started to run again then there was no problem. the speed limit was about 90Miles/h when this thing happened..

Pls reply wit info about this problem.
Thanks

On the check engine light and the engine miss. Your two center plug wires look black and old, are they rubbing on the hood? They look old and so does your distributor cap. I would probably replace the plugs, wires, cap and ignition rotor and see what happens. If there is a “miss” – misfire due to a worn out spark plug or spark plug wire it will cause your check engine light to come on.

Some of these Civics in the U.S had problems internally with the distributor, that caused the engine not to start sometimes and an intermittent engine miss.

If you are friends with your Honda dealership parts department you might want to ask them if there was a recall on your distributor. Outside the U.S. might be different, I really don’t know that?

On the overheating issue. If the temp gauge is at the half way mark I would say that is normal. Much more than half could be a problem. Your radiator looks like it has rust at the top of the seams? Have you checked the antifreeze level inside the radiator? Make sure you are full of antifreeze first. If the radiator is low on antifreeze…well, your engine will run hot. The a/c condenser fan will come on with the air is on, but the radiator fan should cycle on and off as the engine heats up, so I don’t think you have a problem there. 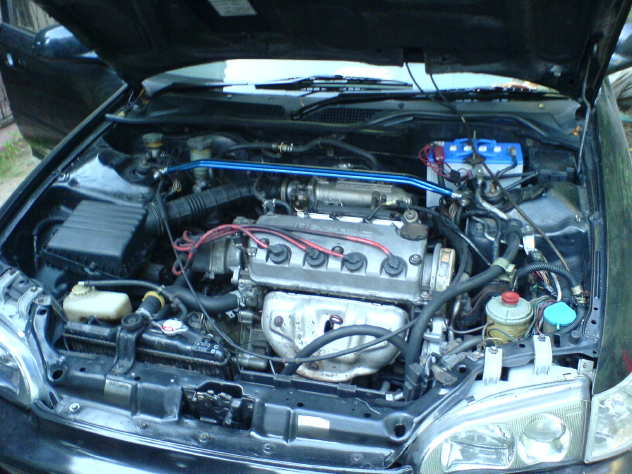 Keep me posted….thanks for the picture and your email.

Posted in: Over Heating