Dash Gauges Went Out While Driving 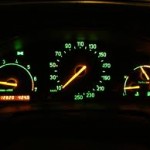 I have a question I’m hoping you can help answer. I have some auto experience, but, newer vehicles behave differently so I’m not positive. I have a GMC Safari, and started having trouble with the dash gauges and the motor. The motor would gag and seem to ‘quit’ while driving, and the gauges would go nasty haywire.

The problems didn’t always happen at the same time, and never lasted more than a few seconds, then things would return to normal. One day a week or so after the first incident, it happened again, this time prolonged, off and on, for a minute or two til the van finally died and had to be towed.

Initially they just replaced the battery,then later that day, I noticed the battery wasn’t charging right- alternator was shot as well. I kinda guessed that but I was told at the shop it was working when they tested it. I know these newer vehicles so much relies on computer, which relies on battery/power supply.

I’m assuming that if that’s the case, if there is something wrong with the supply,that it can cause gauges to do funky things, like not work, give inaccurate readings etc?

Assuming that, then if the supply problem is intermittent,then gauge problems can be as well? Ok, more than one question sorry….I know you are probably busy, I understand that, but even on the internet I’m having trouble finding the answers to this particular situation. Lots of general stuff,just not what I need.

I’m assuming after reading your email that the alternator was probably the culprit to the problem, not charging the battery and providing power to the electronics on the engine.

Has the problem gone away since the alternator was replaced? I would think the problem is probably fixed.

When the engine (and dashboard in your case) does not get a full 12 volt supply of battery power it does weird things. The computer needs to see 12 volts, and when it doesn’t sensors and components start to shut down or give faulty signals back to the computer.

The computer will try to adjust fuel mixture to over compensate for the lack of proper voltage, thus your running bad issue started to happen. Once the alternator fails to supply 12 volts back to the battery, its just a matter of time (just a few miles) that the battery will be totally drained and the engine will stop.

So, the battery has probably been bad or weak for awhile and went undetected, and the alternator finally gave up the ghost too. I recommend replacing the battery every 3-4 years as a preventive measure, and to prolong the life of the alternator as well.

3 Comments on "Dash Gauges Went Out While Driving"