Hello, I’ve been having some trouble with my Chevy Camaro V6. A number of problems have popped up all at once, and I’m not sure if they are related. Here are the symptoms:

1.serpentine belt is being thrown off the pulleys

2. Oil pressure gauge suddenly not working (after working perfectly for the last three years, since I bought the car)

A week ago, I started the car and found that the power steering was not working. I popped the hood to find that the belt was almost completely off the pulleys. I put the belt back on and noticed that it had not been sitting on the tensioner pulley as nicely as it once did.

I replaced the pulley with the belt for the first time three years ago (when I bought the car). When I put the old belt back on the pulleys to drive it home, after restarting the car, the belt would “travel” forward.

I replaced the pulley and belt last weekend but the belt continues to travel forward, and yesterday while driving the belt came off. I had to pull over (in the rain, of course) and put the belt back on.

At the same time I started having trouble with the belt, the oil pressure gauge stopped working. The needle does not move at all, when the car is being driven or even when it is started. While messing with the belt, I noticed an unplugged sensor-type thing hanging by a cord near the oil filter on the front of the engine.

Also nearby is an exposed hole of some sort – it looks like something definitely belongs there. In the hole, there is some sort of plastic ‘bag’ or bubble that deflates when I poke it with my finger. But the plug does not fit in the hole. The hole is round and the plug is an oval shape with a clip that looks like it would attach on the outside of whatever it is being clipped on to.

Could this be where the oil pressure sensor goes, but somehow it has disappeared? Maybe when the belt came off before it knocked it loose, out of the hole and disconnected it from the plug? If that’s true, the sensor would have fallen down the street and is most certainly gone.

And at the same time the A/C has stopped working. When driving the car yesterday, I was experimenting with the A/C, turning it on and off to see if (maybe this time) the air blows cold. Five minutes later, the belt came off. I was doing this the day the belt came off for the first time, last week. Could turning on the A/C be the cause of the belt coming off?

I would appreciate any help or guidance. This car has been so good to me for three years, and it breaks my heart that it has decided to suddenly misbehave. But since it gets around 13 mpg I’m not above throwing it on ebay motors….

I would really need to see this problem in person to identify what is happening.

I would highly recommend you get a mechanic to stick their head under your hood and take a look around. I would be highly suspect of your A/C compressor clutch being the problem.

Can you turn the A/C compressor clutch around by hand….fairly easily? There will be some resistance but you should be able to turn the clutch with one hand. If you can not, you probably have a problem with the A/C clutch or the compressor itself.

I would also check ALL the other pulleys and accessories (power steering pump, alternator etc. etc. ) to make sure I can turn their pulley by hand (with belt removed).

Check the bottom crank shaft pulley, and make sure you can not pull or push the crankshaft pulley in or out. The pulley should not have any slack in it at all. 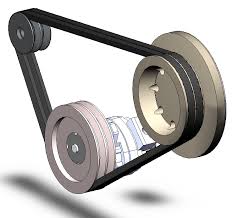 If you still don’t see anything wrong, reinstall the belts and start the engine and watch the belts travel along all the pulleys. Have someone get inside and slowly bring up the RPM’s to about 2,000 and see if the pulley alignments change or the tension on the belt changes.

I would suspect you have an oil pressure sending unit problem or the sender is unplugged. The sending unit is usually on the side of the engine not at the bottom, although yours COULD be around the oil filter area….I don’t have a manual sitting in front of me to tell. The connector is most likely just one or two small wires.