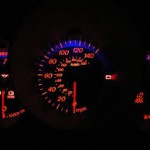 So we replaced the alternator and the regulator is built in and it didn’t help the problem. (but I drive it like that). The light still comes on and every now and then it does that dimming thing. (as I call it–surging).

Well today I had to go to a place over 1 1/2 miles away and it did fine most of the way with the light on but then started to do the surging thing and then when I got in my car to come home the battery was dead.

So we got it going and it acted up the most of the way home and we couldn’t run the A/C or radio but then all of a sudden it acted fine but the light was still on and then on my way somewhere else (by this time it was dark out) I had my lights on and it started dimming down so much that I barely had headlights, but the weird thing was that it wouldn’t stayed dimmed down –it would dim for a second and then be fine for the next second and it did that the whole way home–.

People think its the voltage regulator that is built into the alternator. The auto parts store checked it and said it was fine even though it should be putting out 14 volts but its only putting out 12 and they said the battery was fine. So if you can please HELP!!!!

It does sound like you have a problem with the alternator or voltage regulator, which is internal to the alternator on many vehicles. I know you said you already replaced the alternator, but either you got a defect one or there is another issues you are over looking.

Before you do anything else though I would HIGHLY suggest you take it to an electrical repair shop, one that specializes in alternators and starters (you are bound to have one in your town) or ANY real mechanic shop, and have them do a complete electrical system checked ON the car.

You want them to test:

1. Load test battery – does this battery have the ability to hold a charge?

2. Check alternator output – is the alternator working at all to supply the battery with power?

3. Check for voltage drain – is there an electrical part that is stuck in ON mode, when should be OFF?

This test is quick and cheap and should be the first thing you do. Testing the alternator OFF the car is not the correct way to test the electrical system.

Not sure what kind of vehicle you are driving , but you should be able to buy a qualityrebuilt alternator relatively inexpensive at the auto parts store, so it’s probably not going to be a huge repair.

You can skimp on things like air filters, spark plugs etc. but not on electrical items like the alternator that will leave you stranded in the middle of nowhere.