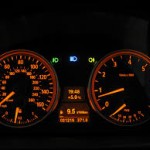 Nothing shows on computer diagnostic scan

Wowow! Ok…hate to admit it, but I’m stumped too. With that many things happening at once, I would suspect a grounding issue…or lack of a ground circuit…either in the battery/alternator or on the engine computer itself.

I would probably start my diagnosis with a fresh new battery and see what happens when I run an electrical test on the system. This might rule out a grounding issue either with the battery itself or within the battery terminal connections.

You just don’t see THAT many things flash at once unless there is a lack of power problem to the computer, or a lack of a ground which can cause all kinds of warning lights to come on.

If you own Alldata, you might check to see if there is a technical service bulletin out on this, but I am not aware of one. I would start by checking all the powers and grounds at the computer, battery and alternator.

IT TOOK ME AWHILE BUT WOULD YOU BELIEVE

SPECIFIC GRAVITY OF A MADE IN MEXICO SEARS ROEBUCK DIEHARD BATTERY

YOU WERE RIGHT, BATTERY WAS THE ISSUE

THANKS FOR THE HELP